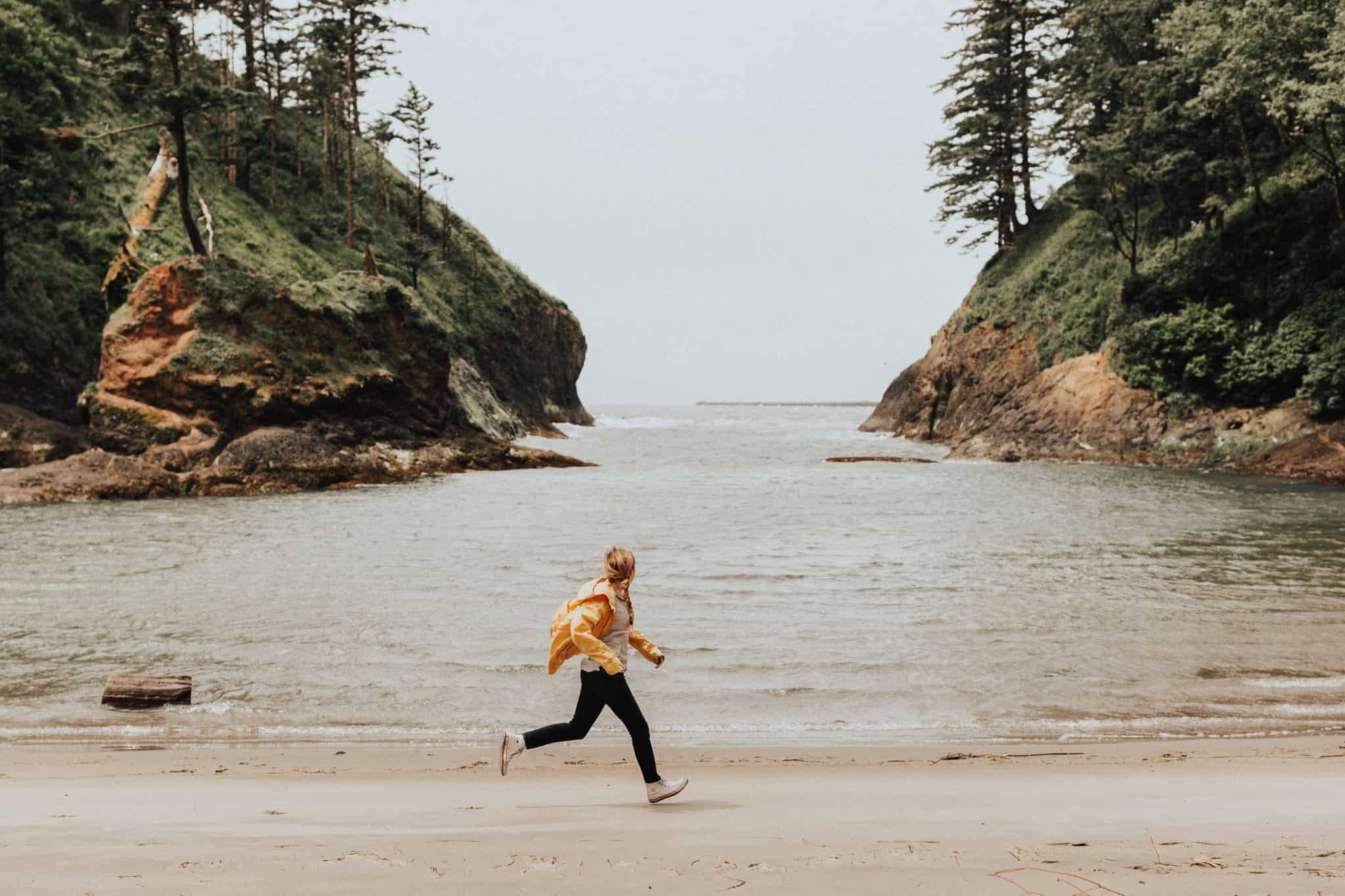 Post Summary: What to see and do in Cape Disappointment State Park, in Washington State.

This is Day 2 of our Pacific Coast Road Trip.

We woke up from sleeping on the beach in La Push, Washington, then we started the drive down the rest of Washington to the Oregon Coast!

We’re excited to take this van everywhere for the next 8 days. Here’s one of our first stops… 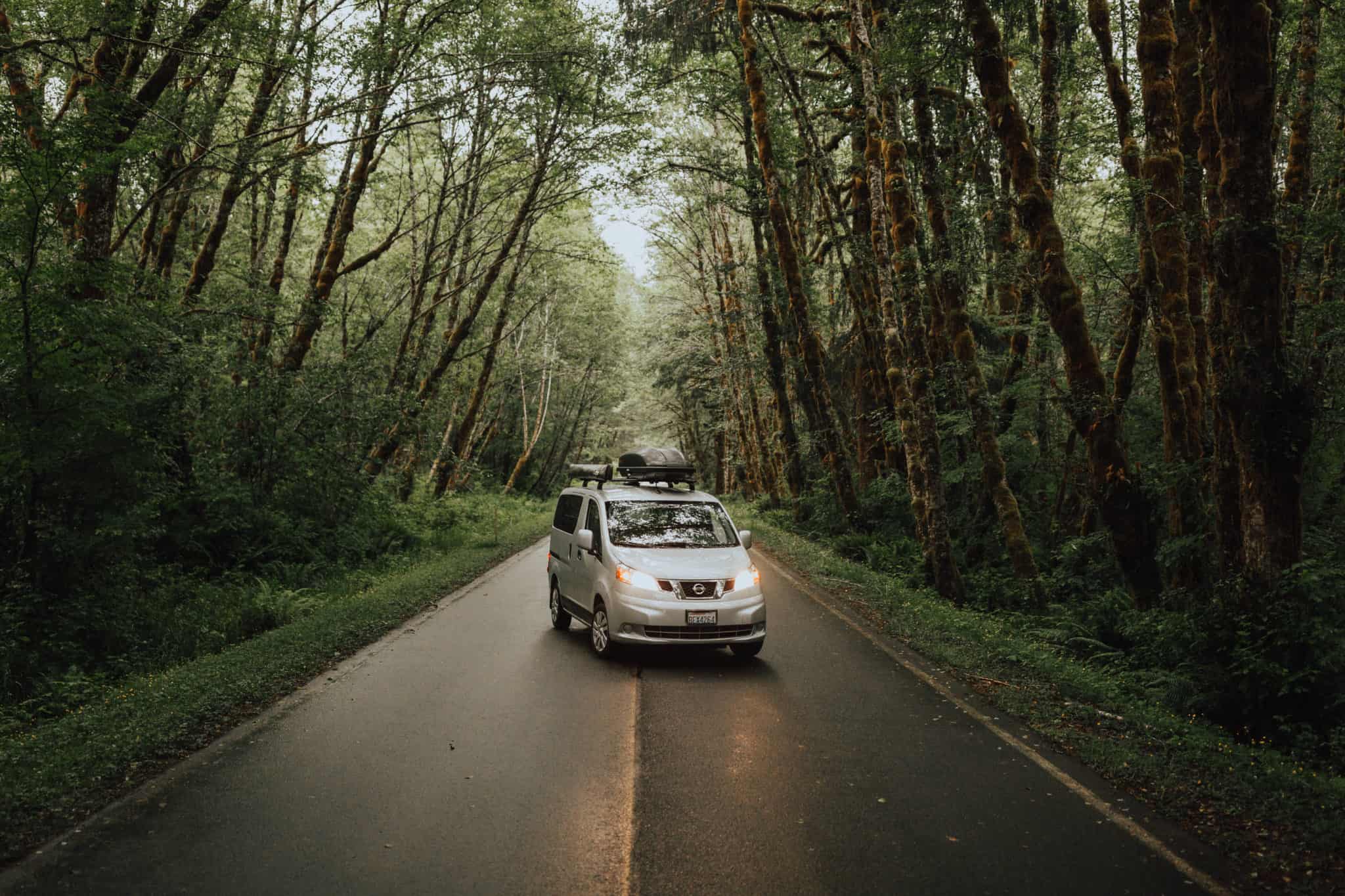 Our first major stop was the Cape Disappointment Lighthouse and Dead Man’s Cove.

These two places are located in Cape Disappointment State Park, in the most southwest corner of Washington.

(Pssst, here’s what the most NORTHwest corner looks like!)

We had several people recommend this place, so we were excited to get out of the car and do a little exploring.

What To See At Cape Disappointment

When we first came up to this cove, I immediately thought, “Oh my gosh, Wes Anderson totally filmed Moonrise Kingdom here!!” Turns out I was wrong–that beach is actually in Rhode Island.

Either way, it was fun to dance on this beach (with our clothes on, of course) and enjoy our first glimpse of sunshine on the Washington Coast.

The climb down to the cove was a treacherous one. Not only was it steep and slippery, but the path is mostly dirt, with little objects to grab onto on the descent.

As we climbed down, Berty’s wedding ring fell off and tumbled down the hill in front of him. Both of us froze and watched it roll a few feet down and stop in a dirt pile.

If it had gone any farther, he really would have been a dead man… 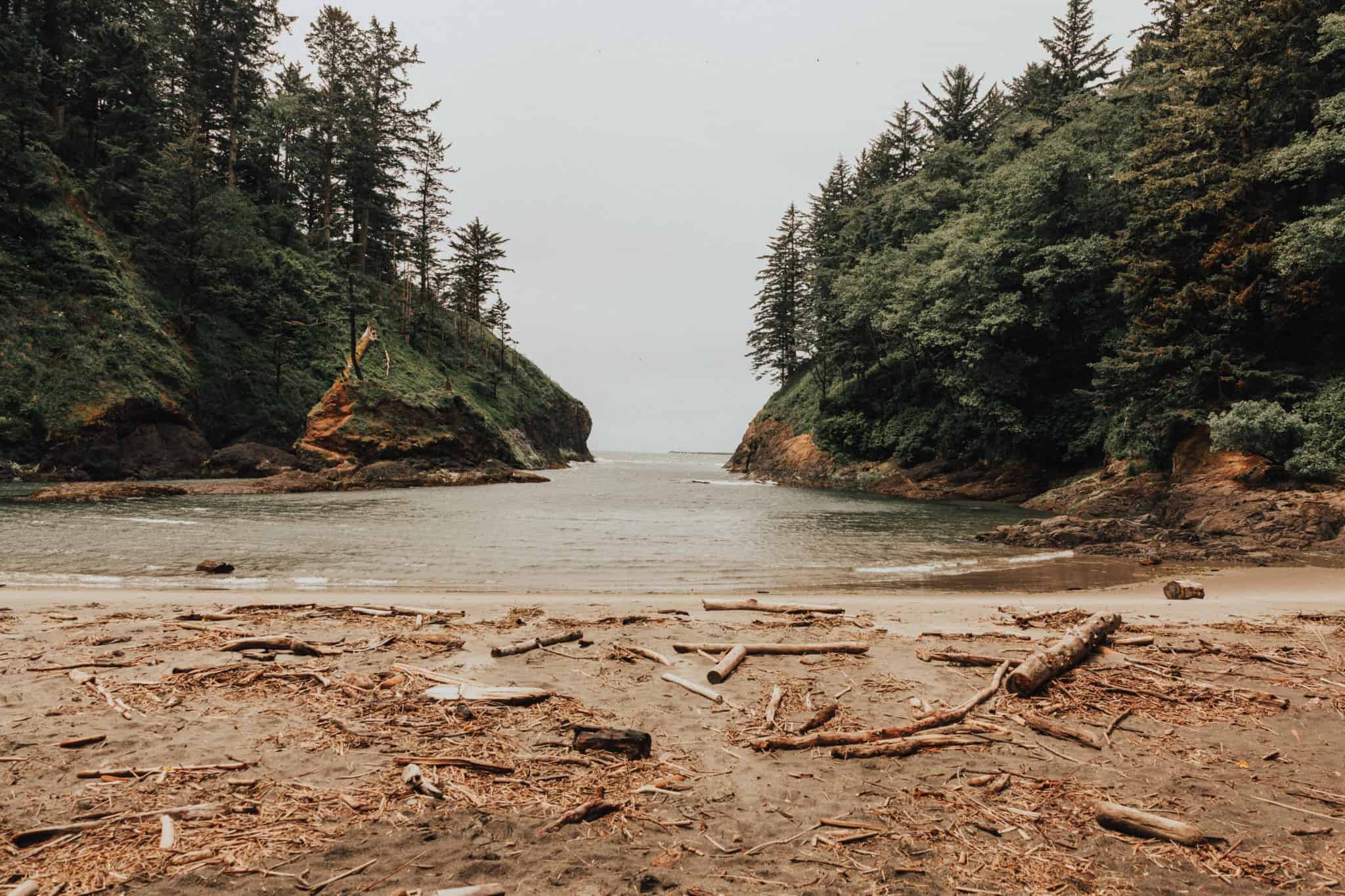 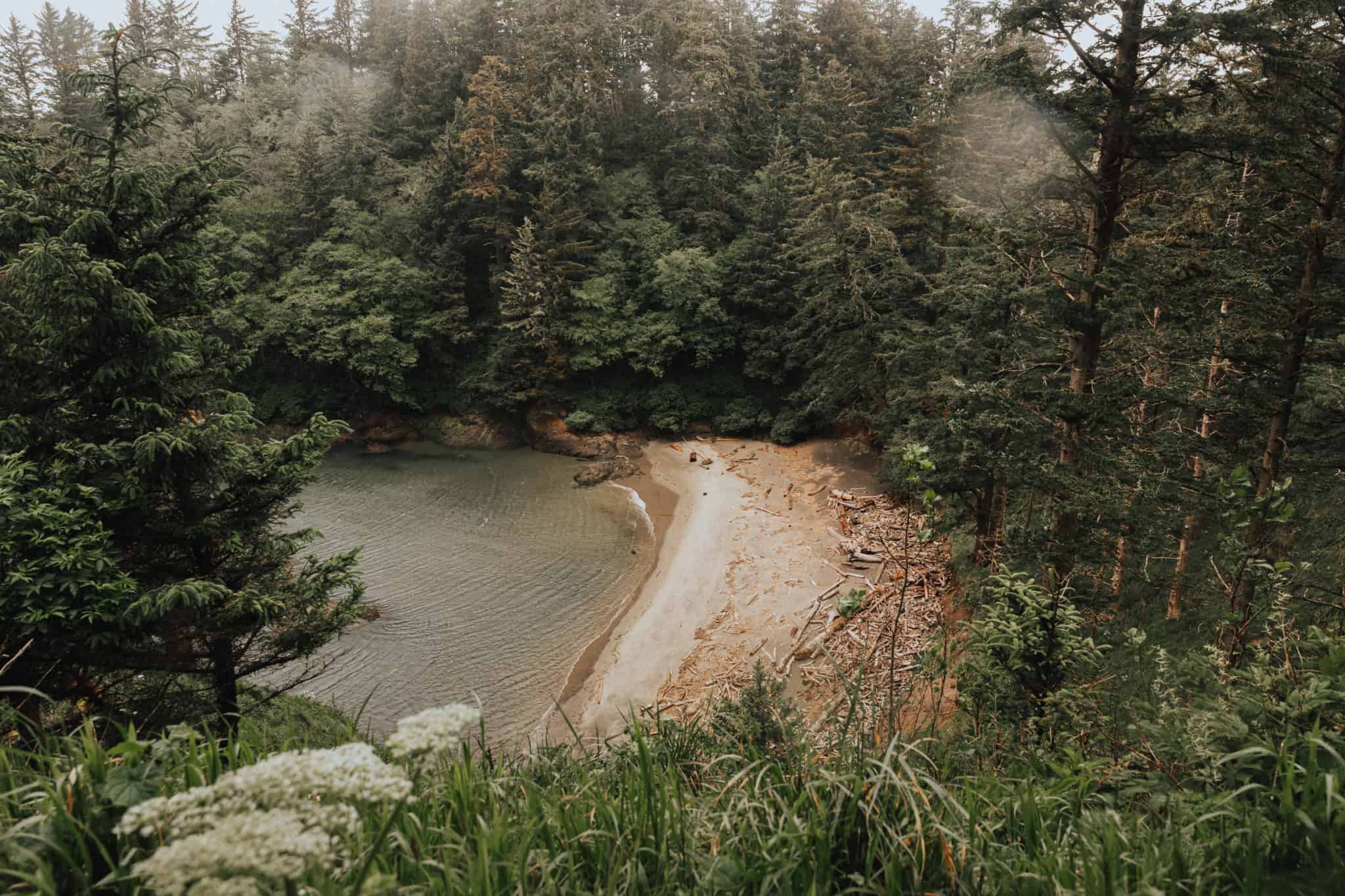 When we decided to climb back up and continue on our hike, we discovered a set of stairs… (insert eye roll here)

The trail to the lighthouse is easy, less than a mile round trip. There are a lot of trails at Cape Disappointment park, but this one has the most traffic.

The weather was pretty gloomy, (typical Washington Coast fashion) but the scenery was beautiful.

It was fun exploring the old lighthouse and seeing a little piece of Washington history. This is still an active lighthouse, and we saw rangers coming in and out of the office as they switched shifts. So cool!

Read More: 101 Adventurous Things To Do In The Pacific Northwest 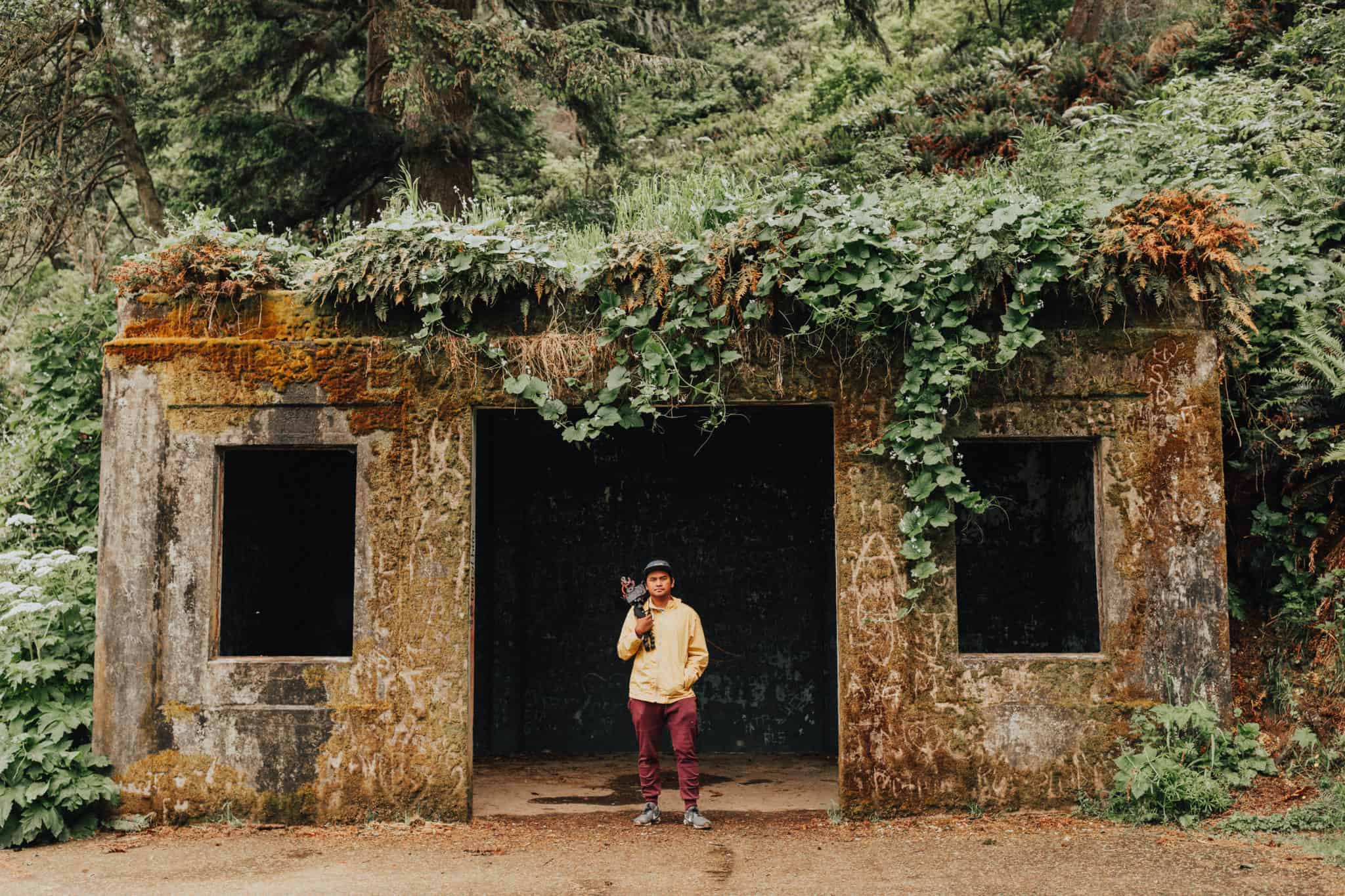 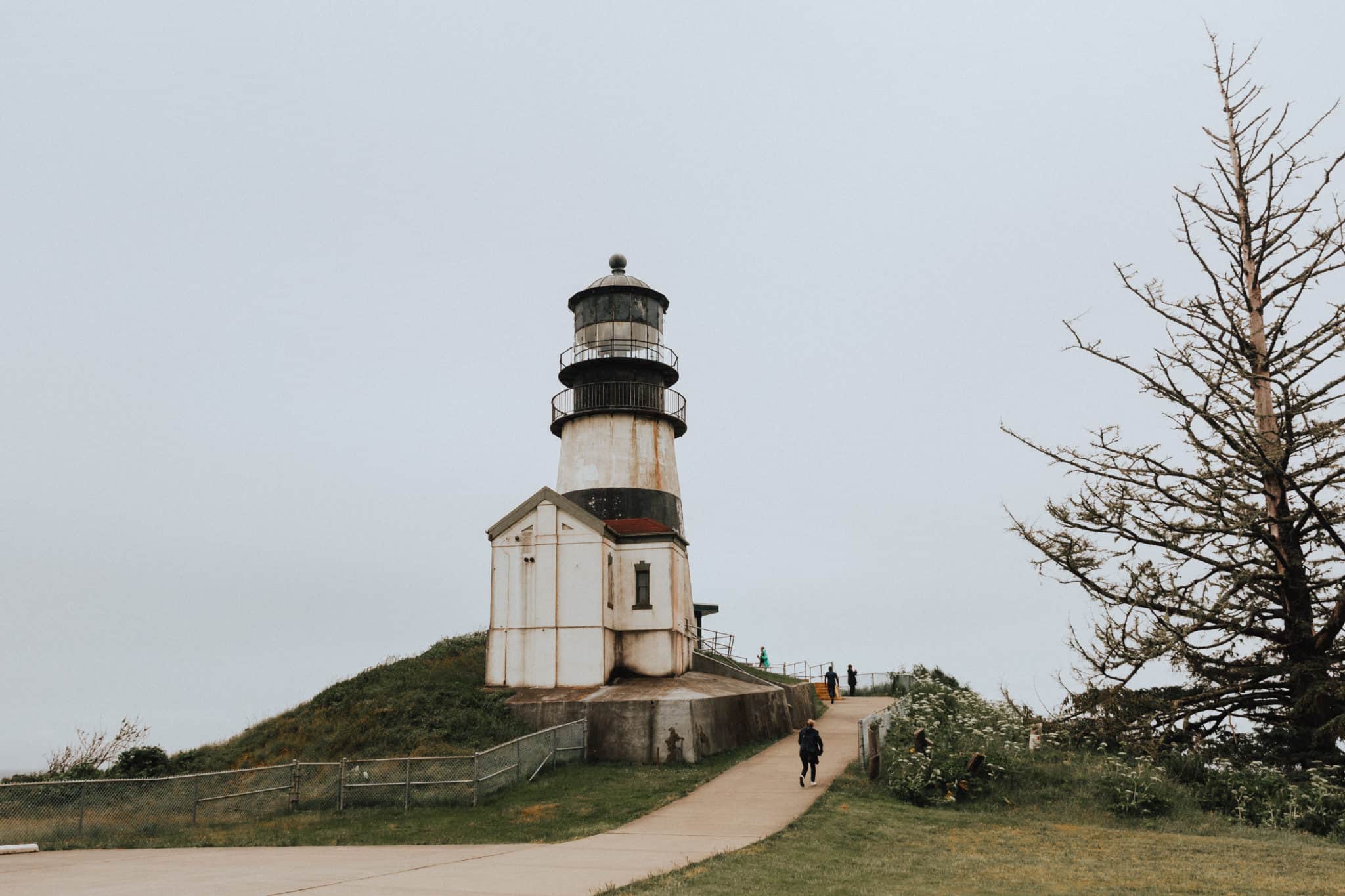 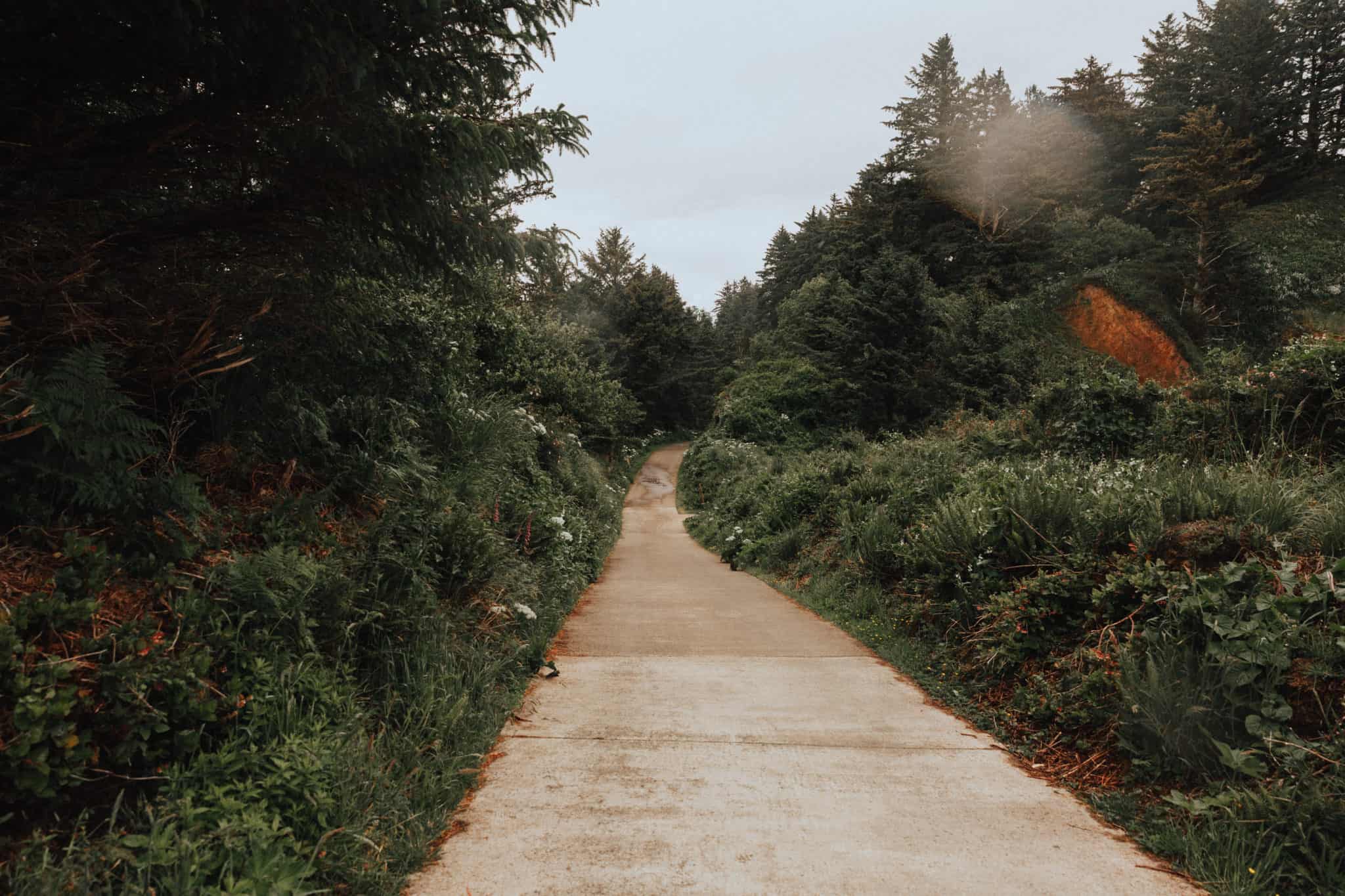 A few months later, we ended up returning with our friends (in the sunshine!) and exploring more of the beach. We even witnessed a few orcas playing in the water!!

Next stops on our road trip:

Have you explored Cape Disappointment? What was your favorite part? Tell us in the comments below!

30 Things To Pack In Your Car For A Road Trip

Explore the Kalaloch Tree Root Cave On The Washington Coast

How To Camp In The Rain

11 Stunning Locations In The Inland Northwest

5 Must-Haves On The Washington Coast

11 Places To See On The Olympic Peninsula 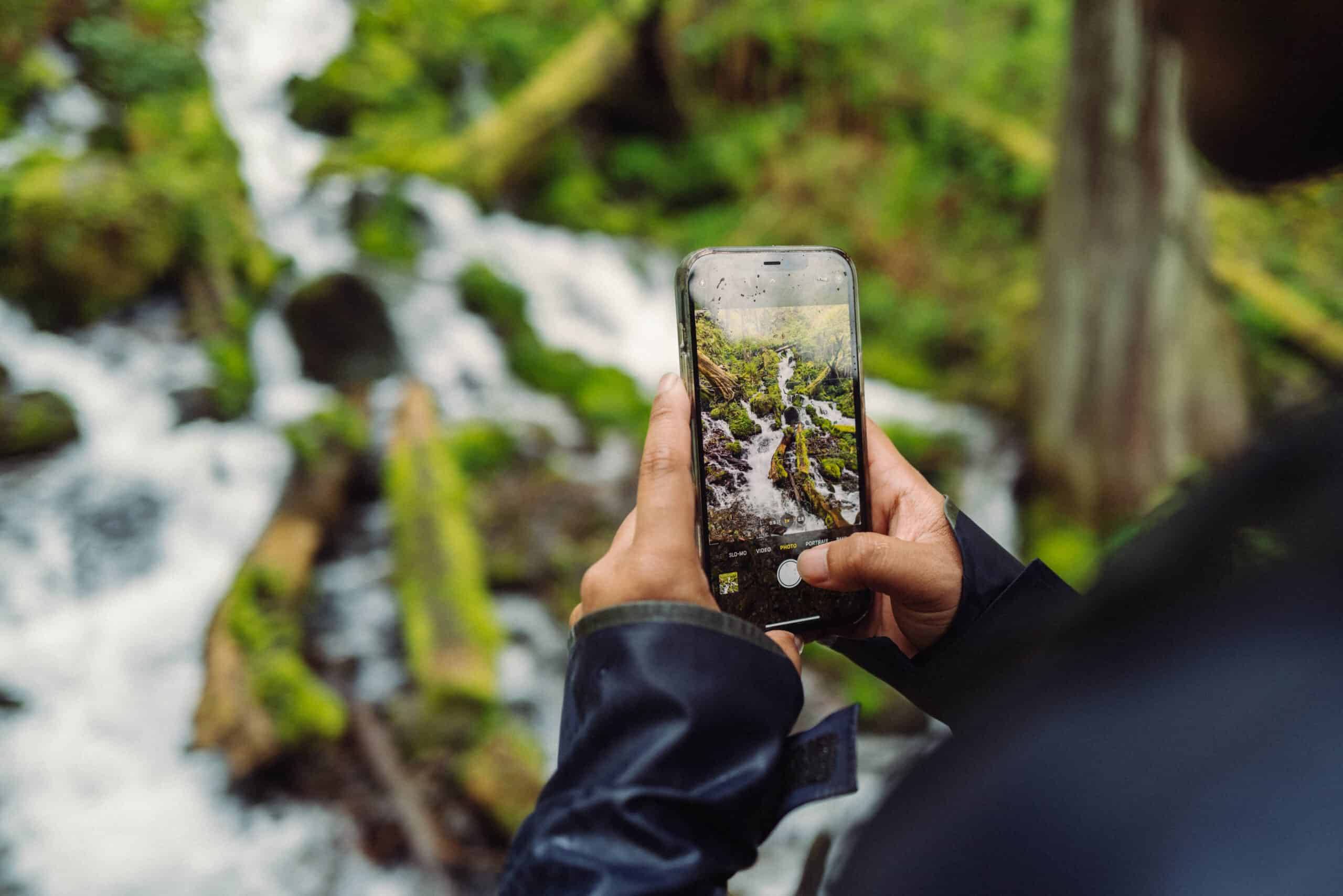 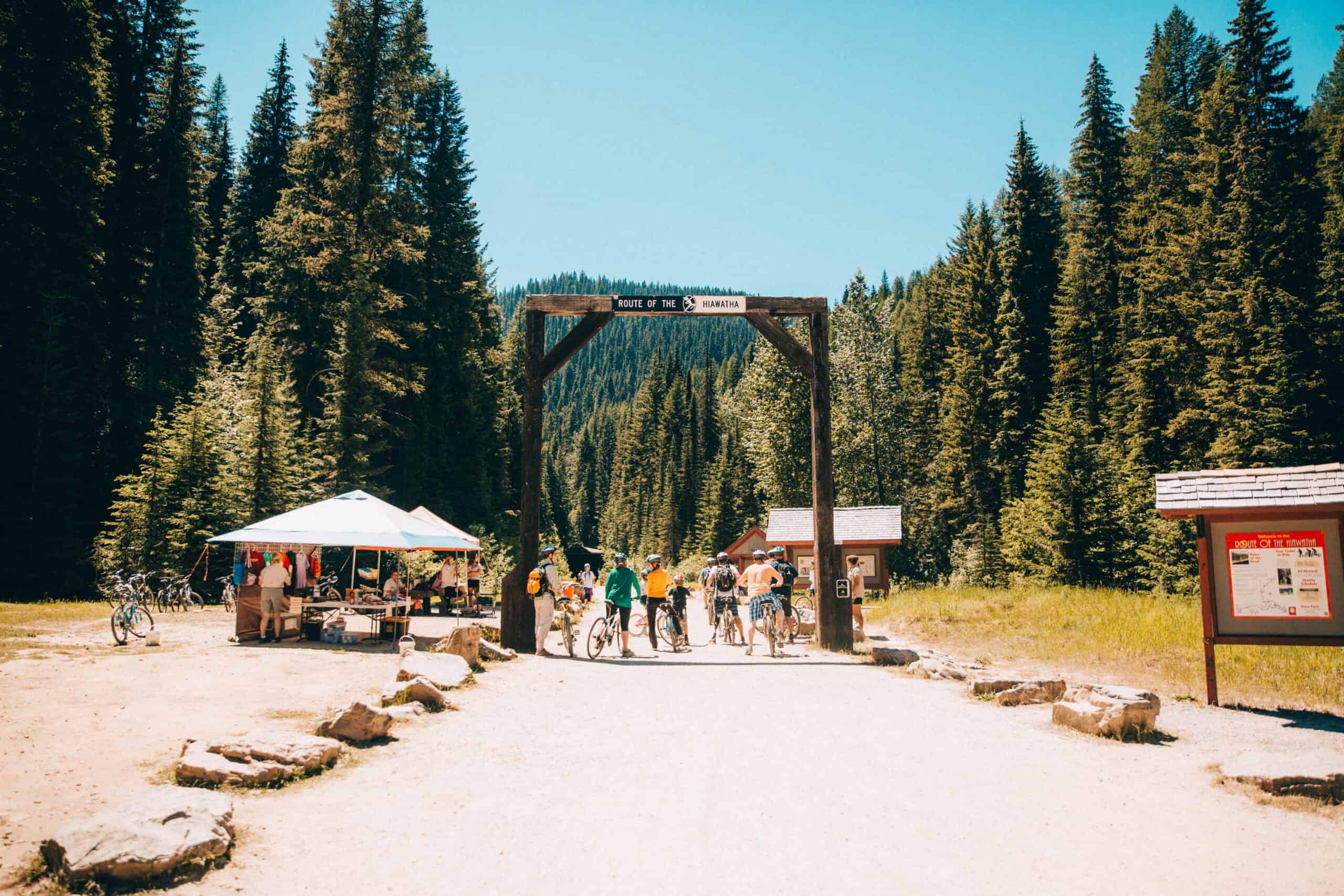 The Complete Guide To The Route of the Hiawatha Bike Trail 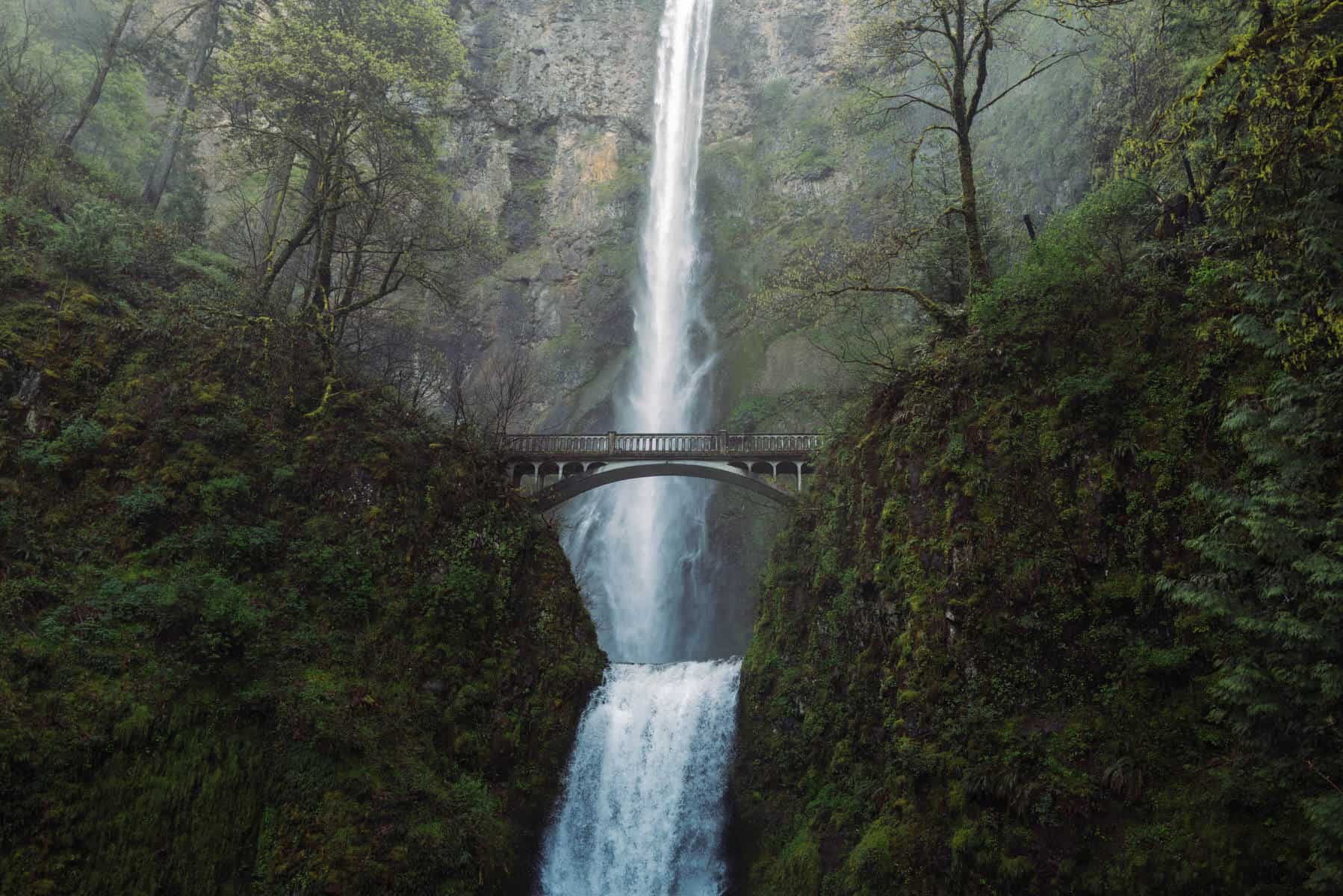