Please enjoy our site for future trip planning and inspiration. We do not encourage travel at this time due to health concerns.

In our attempt to save a few hundred $$ we decided to buy our wedding bands from a small online store. We also pre-decided that our first anniversary gift to one another would be quality wedding bands. This would give us a generous amount of time to save up enough money and choose rings that we would love forever.

Who needs expensive wedding bands when you can get cheap ones that look practically the same?? I thought I was so clever.

I knew it was the wrong decision the second I put the ring on Berty’s finger. Because we didn’t get them professionally fitted, the band was too small for Berty. It was really snug, and under the pressure of the ceremony I proceeded to shove it on his finger as to not draw attention to the fact that it didn’t fit…

Picture from our wedding…notice how red his finger is!! Poor guy!

Fast forward to Official Day 1 of Marriage. We woke up at 5am to start our road trip from Seattle to Banff, Alberta. Berty has been complaining about his ring since we left Seattle. His finger was swollen. I told him I was worried and he should take it off, but the novelty of wearing a wedding band was enough for him to keep it on.

Somewhere along Highway 1 in Canada, we pulled over for lunch and attempted to take off Berty’s ring, which had gotten too uncomfortable for him to wear. I didn’t tell him this, but in my head I was thinking., “we need to go to the hospital..” so in my sweetest, non-panic-y voice, I calmly suggested going to the local emergency room. Because of course they do stuff like this all the time!

When we arrived at the Merritt, BC Emergency Room, the nurse took one look at Berty’s finger and immediately brought him over to the sink. 10 seconds of cold water and soap and it was off! She said we were lucky to have come when we did – much more time longer and we would have had to get the ring cut off! 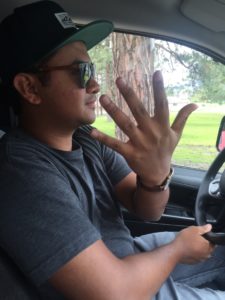 Health insurance is supposed to be great in Canada…FOR CANADIANS. We were very lucky to have an -in-and-out trip. Any more than that, she assured us it would have be thousands of dollars for an international hospital visit. Eeek!

Wedding Planning Tips #1: Don’t listen to us. Looking back I wish we would have spent money on quality wedding bands from the start. Then we wouldn’t had an ER trip during our honeymoon!

Want to find the best places in the PNW?

Enter your email below and we'll send you your PNW Bucket List! 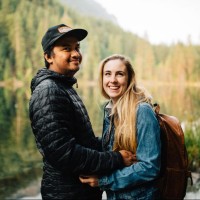 About Emily and Berty

We're Berty and Emily Mandagie, the husband and wife duo behind TheMandagies.com. We're passionate about adventure, photography, and our home in the Pacific Northwest. We share moments and places in the PNW, and how you can experience them too.

We're Berty and Emily Mandagie, husband and wife travelers, photographers, and journalists! This blog lives to inspire outdoor adventure, inspired by our home in the rainy Pacific Northwest. Join us in saying YES to new hikes, fresh perspectives, and living life outside with the people you love most!